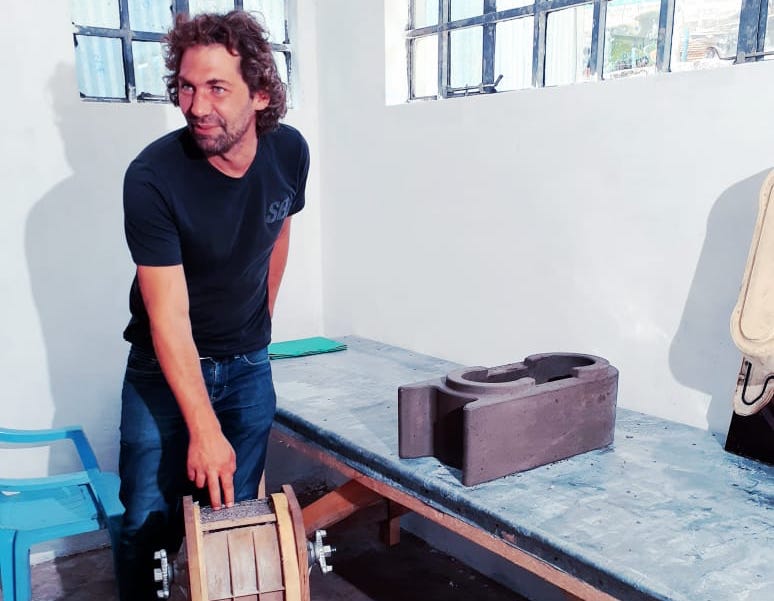 The Start Somewhere concrete hollow block and its development

The heart of our work is the Start Somewhere hollow concrete block, which Oliver von Malm developed with the help of PERI and the University of Innsbruck. The locally produced stone provides the basis for our school construction in Kibera and should also give slum dwellers the opportunity to build their own construction industry in the slum in the future.

After we had supported two schools in Kibera with food, school materials and some renovations, the number of students grew fortunately. (More about the reasons for building the school can be found here.) Due to the growing number of students, the building soon became too small. The local construction method with wood, earth and corrugated iron resulted in great heat inside and hygienic problems. Our initiator and then architecture student Oliver von Malm made the construction of a new school the subject of his master’s thesis. His thesis “Construction in a slum area” can be read here.

“I had very high standards for my master’s thesis” Oliver von Malm tells us, “I didn’t just want to design a building for it that would help slum dwellers, but to develop an idea that could help many more people in informal settlements.”

Before he started working on the new system, he studied the typical local construction method using clay and earth, which is particularly common in rural areas. With this technique, a great deal can be built with natural resources, both simple houses and impressive multi-story buildings. However, this construction method has many disadvantages compared to concrete buildings in terms of hygiene, safety and, not least, the risk of fire, which is very high in slums due to the tight construction.

In order to save material, a hollow stone with thin concrete walls was used, which could be filled with clay and earth if necessary. Not only does this have the advantage of a solid wall as opposed to a corrugated metal wall that is prone to collapse, but heat does not penetrate the interior as quickly. Modular building systems are very advantageous for a simple construction process. Because of the often very irregular plots of land in slums, the technology had to be flexible. The idea of a modular block that allows flexible floor plans was born.

At the end of the master’s thesis, a hollow concrete block was created that met the special requirements of construction in slums. Oliver von Malm subsequently received a scholarship from the University of Innsbruck to continue his research. During a lecture on his work, the first contact was made with PERI, one of the world’s largest suppliers of formwork and scaffolding systems. The contact develops into a technology partnership between PERI and Start Somewhere. Research continues over a long period of time until, after a total of four years, a finished concrete hollow block suitable for series production is produced. You can read more about the construction system here.

Finally, the school in Kibera, the Oloo’s Children Centre, could be built. We from Start Somewhere bought some additional land and soon started with the concrete planning of the construction. Today this construction is in full swing.